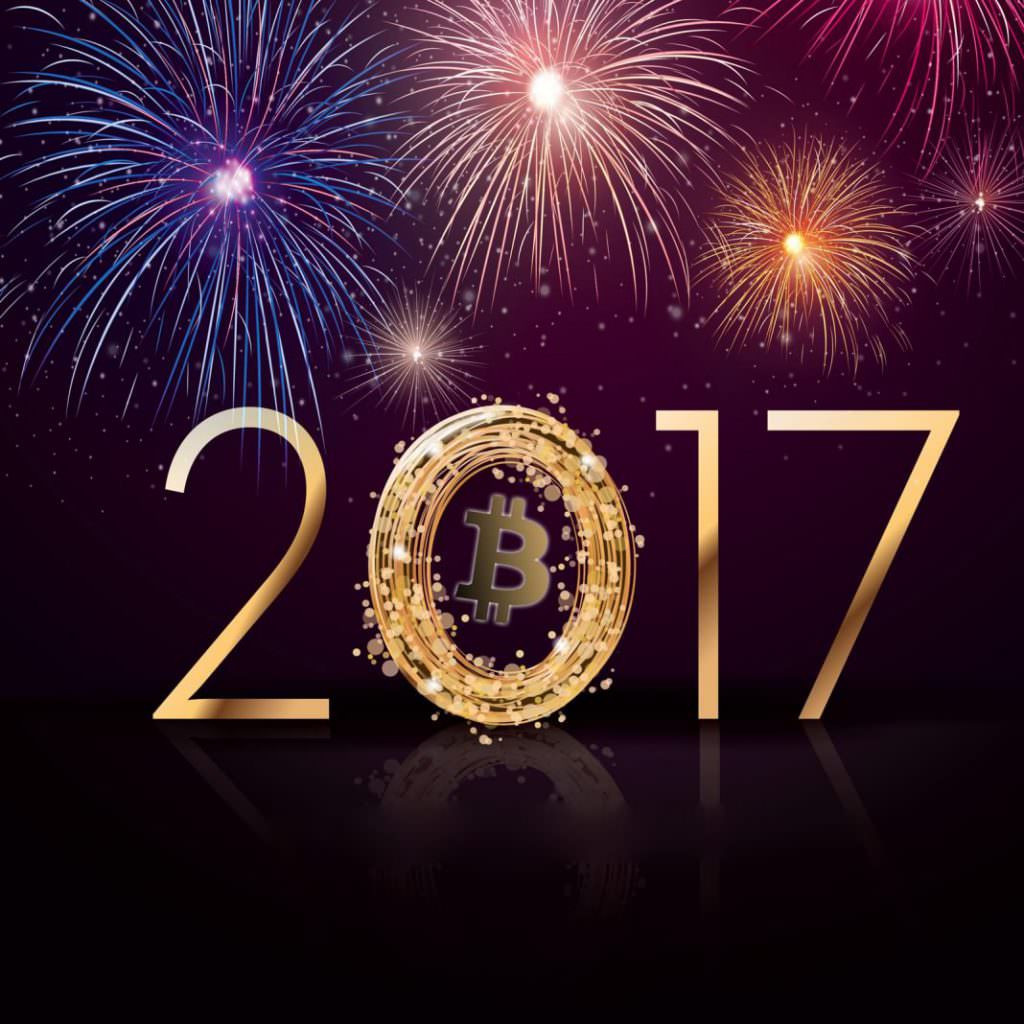 On December 30th, 2016 the price of bitcoin (BTC) was $960 USD, and since then the price had risen 1,941 percent 350 days later to an all-time high of $19,600 across global exchanges. Now the price rests at roughly $13-14K but a lot more has changed this year besides the significant price rises of bitcoin and many other cryptocurrencies. Cryptocurrencies have had an incredible run in 2017, to say the least. The entire landscape of 1,368 different digital assets now commands a whopping $585Bn market capitalization. One significant factor that has changed is back when bitcoin was $960 per coin, its market capitalization dominated all 1,300 altcoins by 90 percent, but now that metric is much lower. It was the only cryptocurrency that had over a billion dollar market cap, in fact, it had a valuation of $14.1Bn on December 25, 2016.

Ethereum which was only $7.29 per token on that day, and had a $635Mn market valuation, but in 2017 captures a $72Bn capitalization. Right now the top 32 cryptocurrency market caps have over a billion a piece, or more and bitcoin core only dominates by 38 percent. Bitcoin’s market valuation has crossed new highs nearly every month of the year, but 2017 was also the year BTC lost quite a bit of market share dominance.

At the beginning of the year when BTC reached $1,100 per token, the economy was shaken when China’s central bank started cracking down on Chinese bitcoin exchanges. From that high during the first week of January bitcoin’s price dipped below the $800 zone but rebounded at the end of the month back above the $1K price range. Since then the People’s Bank of China (PBOC) has stopped all the Chinese exchanges from trading cryptocurrencies with the renminbi. On March 2 the price of bitcoin exceeded the price of one troy ounce of .999 gold, and bitcoiners were quite pleased with this feat.

It was the fourth of May when bitcoin surpassed the $1,500 per BTC price range due to increased demand from countries like India, Japan, and Russia. At this time mainstream media started covering bitcoin stories more often. Bitcoin’s price crossed the weighted average of $2,000 per BTC across global exchanges on May 20. Following this price breakthrough, publications like the New York Times, Bloomberg, Fortune, Time Magazine, and many others published bitcoin headlines nearly every week. Another milestone the bitcoin network achieved was when it surpassed a hashrate of over four exahash per second in May as well. During this time the ethereum community saw its tokens increase in value exponentially and its market cap almost came close to “flipping” bitcoin’s market share domination.

The New York Agreement and the Announcement of Another Hard Fork The spring also saw the rise of the alternate bitcoin protocol codebase Bitcoin Unlimited. At the time talks of “forking” away from the network began increasing. During the end of May the “Barry Silbert compromise” otherwise known as the “New York Agreement” produced the controversial Segwit2x roadmap. The plan was to implement Segregated Witness in August followed by a 2MB block size increase three months later. Initially, most of the community backed the project up until Segwit was integrated, then the core developers and supporters of that group abandoned the idea of a 2MB hard fork. The Segwit2x fork was canceled two weeks before the scheduled hard fork.

On July 2-3rd the price of bitcoin core markets smashed through the $2,500 price zone and around this time the scaling debate over transaction bottleneck, and the fee market started heating up even more so. Alternate bitcoin protocol implementations like Bcoin started appearing, and the debate took on a whole new level. The summer was filled with discussions about the possibility of a user activated soft fork (UASF), and a user activated hard fork (UAHF), and Segwit2x being deployed. Scaling discussions and these specific movements got so elevated that another bitcoin client was announced called Bitcoin ABC.

The lead developer behind the project revealed there would be a hard fork on August 1 that would produce Bitcoin Cash (BCH). The BCH network was born that day and produced a cryptocurrency with the same history as the legacy chain but also an 8MB block size limit, and the removal of Segwit. On August 5, the price of bitcoin core broke the $3K zone, and the scaling debate arguments became even more aggressive. The BCH network was moving along during its first week and traded around $200-300 per token. Less than two weeks later BTC was trading at $4K per coin, gaining a 1,000 dollar increase in one week’s time. At this price, bitcoin’s entire market capitalization was roughly $66Bn and its market cap dominated by 47 percent of the entire $134Bn cryptocurrency market cap. In addition to the birth of bitcoin cash, a large swathe of other bitcoin forks or ‘snapshot clones’ came into existence. The controversial Bitcoin gold project followed bitcoin cash, offering a GPU mineable bitcoin but also a pre-mine as well. So far there are a bunch of forked bitcoins, but most of them have little infrastructure or don’t even have an operating network yet. Forked offspring of the bitcoin codebase include diamond, ruby, lightning, platinum, united, god, and the recent ‘revival’ segwit2x snapshot.

Bitcoin Reaches $10K Per BTC, and Even ‘Grandma Is In’

The price of BTC reached a stable $5,000 per bitcoin in October and surpassed the $6K mark in the middle of the month. Interest in bitcoin touched an all-time high as well as Google Trends reported a big jump in worldwide attention. And indeed the world was catching on as the whole ecosystem saw over a million bitcoin wallets are created every week since December of 2016.

On November 28 the price of bitcoin reached a high of $10,000 per BTC, surpassing many crypto-proponents’ expectations. That day bitcoin’s market cap exceeded over $167B, and BTC markets saw over $6.3B worth of bitcoin trade volume. The very next day bitcoin’s rocket ship engines kept on rising, reaching an all-time high of $11,395 during the early morning hours of November 29. A week later bitcoin’s overall increase during the year was well over 1,100 percent when the price per BTC tapped the $12,000 region. Again the very next day on December 6 bitcoin’s value increased by another 1,000 touching $13K across global exchanges. That week bitcoin appeared on the front page of the Wall Street Journal with a headline that said:

Bitcoin Mania: Even Grandma Is In

On the very same day, the price of BTC surpassed $13,000 it also breached the $14,000 zone. At the time the Japanese yen and Korean won dominated the markets as far as national currencies paired with BTC are concerned. On December 6 the price of bitcoin again astonished the world by reaching $15K per coin. At this time the community was made aware that two of the largest FX exchanges in the world, Cboe and CME group, were planning to produce bitcoin derivatives products for mainstream investors. Over the next week, bitcoin’s value rallied to $17,000 and then reached an all-time high of $19,600 per BTC during December 16-17. Alongside this feat bitcoin core’s network had a significant mempool backlog filled with over 250,000 unconfirmed transactions, and fees per transaction reached a median average of over $30-40. Bitcoin cash with its average fee of 0.02 per transaction started off at a value between $200-300 per token in August but touched a high of over $4K per BCH in December. Large cryptocurrency companies like Bitstamp, Coinbase, Blockchain Wallet, and Bitpay also started integrating support for BCH, adding significant value to its ecosystem. Further the month prior, in November, the BCH network completed a successful hard fork which changed its difficulty adjustment algorithm. Again much like the “ethereum flippening” this past spring, the cryptocurrency community has been discussing another market share flipping effect called the “cashening.”

At the moment bitcoin core markets are hovering around $13,000-14,000, and bitcoin cash is averaging around $2430 per BCH. Over the past week up until Christmas, cryptocurrency markets, in general, dropped in value over 40 percent. At its low point, the price of BTC touched $11,500 across global exchanges last week. Now all of the crypto-markets have regained a touch of strength, and no one truly knows what 2018 will bring. However, it’s safe to say this year was one of the most thrilling rides throughout the entire existence of blockchain technology and cryptocurrency solutions.

What did you think of 2017? Let us know in the comments below.

Images via Pixabay, Bitcoin.com, the PBOC, and Shutterstock.

Need to know the price of bitcoin? Check this chart.