Bitcoin is pressing higher after consolidating within a $500 price range for almost a week. As reported by Bitcoinist, just hours ago, the leading cryptocurrency broke above the pivotal $10,500 resistance, liquidating millions in the process.


Analysts think that Bitcoin is primed to move higher despite this move being so nascent.

On the ongoing move higher, one historically accurate trader remarked in reference to the chart below:

“looks to me like a lower timeframe ascending triangle breakout on $btc. technically i feel we have to be bullish again here. macro picture i’m unsure of now, just trading what im dealt.”

The chart that the analyst shared indicates that Bitcoin will move towards $11,200 to $11,500 in the near future. This is because the cryptocurrency formed an ascending triangle, which is a textbook bullish pattern.

The analyst that made this call is the same one that in the middle of 2018 predicted that Bitcoin would bottom at $3,200. Six months he was proven correct when the cryptocurrency bounced at $3,150, then rallied over 300% in the months that followed.

Not the Only One That Thinks So

The trader’s assertion that Bitcoin moves towards $11,000 is in line with sentiments shared by a number of other cryptocurrency analysts.

Referencing the chart seen below, one trader noted that Bitcoin could move towards $11,200 if it closes above $10,450: 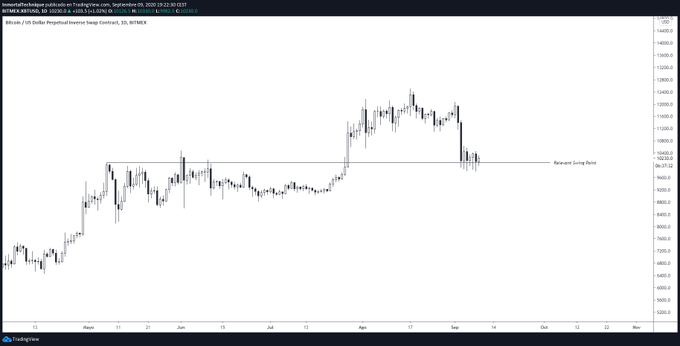 It’s important to note that weakness in the legacy markets on Sunday evening could harm Bitcoin. Whether or not that happens, though, remains to be seen at this point in time.