The last two days found Bitcoin (Symbol: BTCUSD) in its most bearish states in more than three months.


The cryptocurrency experienced a significant sell-off on Wednesday that continued until the next day’s New York session. On the whole, the BTC/USD pair lost 12 percent of its value, falling from $11,950 to as low as $10,000. Its renewed downside sentiment raised worries about an extended plunge, with many predicting $9,600 to be the next bearish target.


Bitcoin logs its weakest weekly performance since May 18. Source: TradingView.com

Bitcoin was not a standalone case, however. The cryptocurrency’s abrupt dive coincided with a similar move in the traditional markets. The US stocks fell sharply on Thursday, as well, with the tech-savvy Nasdaq Composite Index plunging 5 percent to 11458, its most significant one-day decline since June 11.

But one asset rose higher against the fall in the US stocks, gold, and Bitcoin markets: the US dollar.

The greenback’s benchmark index (TVC: DXY), which measures it against a basket of foreign currencies, jumped from its two-year low earlier this week. The rebound added about 1.15 percent to its strength. 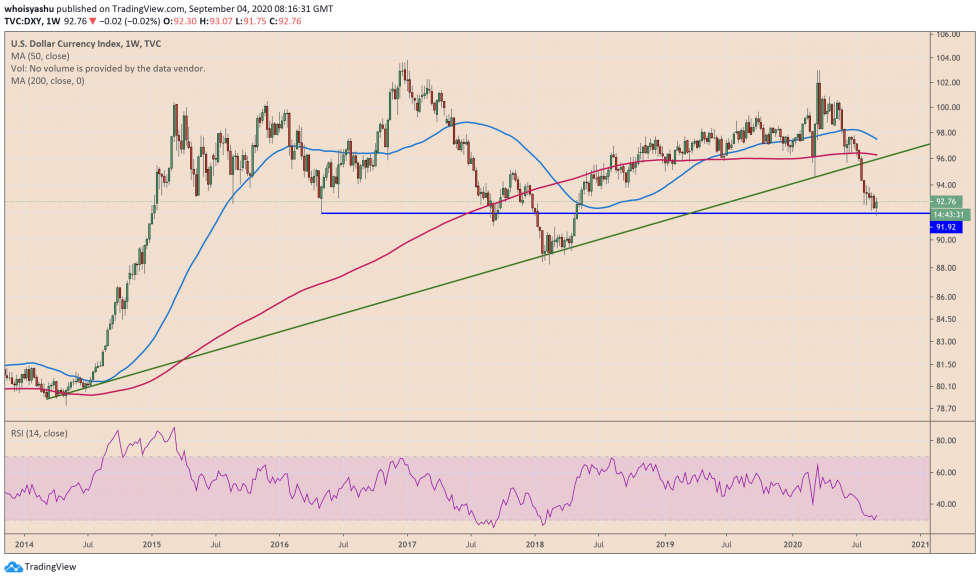 So it appears, daytraders–not investors–moved back into the US dollar after assessing recent growth reports in the US economy. Earlier this week, the country’s manufacturing data showed improvements, and weekly-adjusted unemployment benefits claims dropped.

Traders took it as their cue to sell their profitable positions across the risky and non-risky markets. Hence, the capital moved back into the dollar, strengthening it along the lines.

A short-term rebound in the US dollar market did not promise to extend itself for larger timeframes, at least according to the latest Reuters poll on the fiat currency.

The media mogul surveyed 75 strategists on the US dollar’s forward outlook for the year 2021. A majority of them said that they expect the greenback to extend its decline as long as the Federal Reserve maintains its benchmark lending rates near zero. Atop that, the US central bank’s accommodative approach to higher inflation would increase the said downside risk.

“The Fed’s policy actions have driven the main reason why the dollar has weakened so sharply over the last four or five months,” Lee Hardman, currency economist at MUFG, told Reuters.

“So they’ve basically slashed rates to zero, that yield differential in America over the rest of the world is compressed and that obviously helped keep the dollar at such strong levels in previous years, which is no longer the case.”

Meanwhile, scarce assets like Bitcoin and gold pose as a nemesis to an abundant dollar. Investors hedge into these perceived safe-haven assets because they risk losing the value in their savings due to a rising consumer price index. The same sentiment helped gold and Bitcoin rise exponentially from their mid-March nadirs.

The Reuters poll shows that the recent dollar rebound is more technical than fundamental. Its outcome has left Bitcoin under the same upside bias as it was before this week’s plunge.