Bitcoin price has had a very positive week on the back of probably its worst one this year. Since Monday’s dip, BTC has gained 18% to current prices. Chart patterns and the lack of a major capitulation could indicate that the bottom is in and the only way is up from here.

Bitcoin has ended a week of gains on a high note, pushing towards $8k again following a plunge to $6,550 on Monday. According to Tradingview.com BTC topped out at around $7,850 a few hours ago before pulling back to $7,750 where it currently trades. 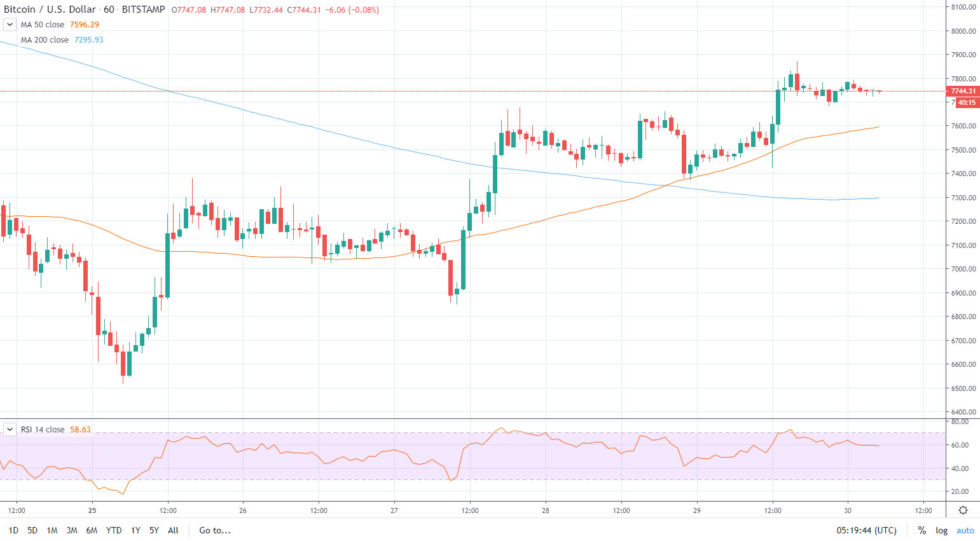 The move marks the third significant upside push this week and an overall gain of 18% since the six month low. Hopium is starting to return to the scene following a 30% dump this month for bitcoin.

Its next targets on the upside are $8,100 and $8,500 beyond that. From there, things may start turning bullish again if this really has been the local bottom.

Trader and analyst Alex Krüger called that $8k will trade again this time last week when BTC was starting to crumble. He added that a bear market was descriptive of current events, rather than predictive of what comes next.

In a follow-up tweet yesterday Krüger added that the bottom has been ‘textbook perfect’ and things are about to turn positive again.

“Should be obvious why I believed $8000 “will trade again soon”, it’s where downtrend accelerated. The bottom is textbook perfect, many people quit in rage, Bitmex funding about to turn positive.”

My current $BTC roadmap. Should be obvious why I believed $8000 "will trade again soon", it's where downtrend accelerated.

The bottom is textbook perfect, many people quit in rage, Bitmex funding about to turn positive.

Nothing to chase if not long IMHO. pic.twitter.com/uPzJpKqd6f

Since mid-month BTC dominance has also started to creep back up as it closes on 70% again. The fear and greed index is moving out of the extremities and things are slowly starting to show signs of improvement.

There has been no major capitulation this year and the $6k zone may well have been the last higher low compared to 2018’s $3k zone. The long term trend is still up regardless of these wild price swings which those familiar with crypto markets should be used to by now.

The bitcoin price lift has had similar effect on crypto markets today as total capitalization tops $210 billion. In five days over $30 billion has been poured back in but that has largely gone into BTC.

Ethereum has made a minor move to reach $155 and is eyeing further gains to $160. ETH is still very low however and has failed to break free of the movements of its big brother. There has also been an inordinate amount of FUD and tribalism from the crypto community which tarnishes the entire ecosystem.

Most altcoins are in the green at the time of writing though they still have a long way to go before any of them can be considered bullish.

Will bitcoin price reach $8,000 this weekend? Add your comments below.