Ethereum has been one of the best performing major cryptocurrencies over the past 24-hours.


Yesterday, after consolidating around $390 for an extended period of time, the cryptocurrency’s price saw a massive spike that led it up to highs of over $430.

This rally came about suddenly and unexpectedly, with it catching many investors off-guard due to it being somewhat random.


Concurrent with this movement, most other digital assets remained stagnant, although it did help create a slight tailwind that pushed BTC up towards the upper-$11,000 region.

Analysts are now noting that it may be poised to see a sharp retrace before it is able to post any further gains.

This retrace could also confirm an extremely bullish accumulation pattern – so long as bulls defend its key support.

At the time of writing, Ethereum’s price is finding stability around $425, which is just below the peaks it posted during yesterday’s sharp movement.

The momentum it incurred yesterday allowed it to test highs of $435 on multiple occasions, but it has yet to stabilize above $430.

While speaking about this, one analyst explained that he believes it may need to see a slight decline towards $400 before it can push higher.

“ETH / USD: Weekly close looking completely nuts right now, I guess $475 would be the next major level of resistance. Probably expect a pullback to around $400 level before the end of the month to confirm this level as support but overall this is looking more bullish than ever.”

Another analyst also forecasted near-term downside, but he believes the next plunge is part of a bullish accumulation pattern that Ethereum has been forming as of late.

As seen on the below chart he offers, this next decline could lead the crypto into the $360 region – which has been established as bedrock support on multiple occasions. 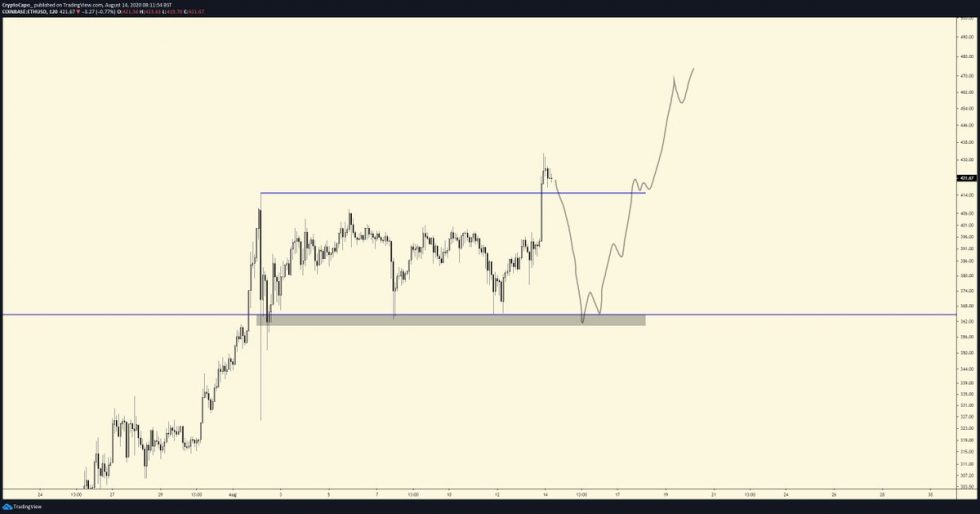 Even if Ethereum does face a short-term pullback, it does appear that the crypto is well-positioned to see further upside over a macro time frame.