Cryptocurrencies and Bitcoin in particular have experienced enormous gains since the beginning of the year. While many people are interested in investing in this space, there are some concerns about investing in actual bitcoins or other electronic currencies. Some of these concerns include:


There are ways to gain bitcoin exposure through instruments that can be bought with your traditional brokerage. These instruments range in size and volatility.

As the prices of cryptocurrencies increase, there is more of a demand to mine them. Companies that produce instruments to mine these currencies will benefit from an increase in demand.


Nvidia (NASDAQ:NVDA) – Nvidia is perhaps the largest company that has a direct relation to the price of cryptocurrencies at a market capitalization of almost $100 billion. Nvidia has actually said publicly that cryptocurrencies have benefited the company. Nvidia CEO Jen-Hsun Huang said crypto is “a very important market that will likely continue to grow over time.”

NVDA has been very highly correlated with Bitcoin in 2017. 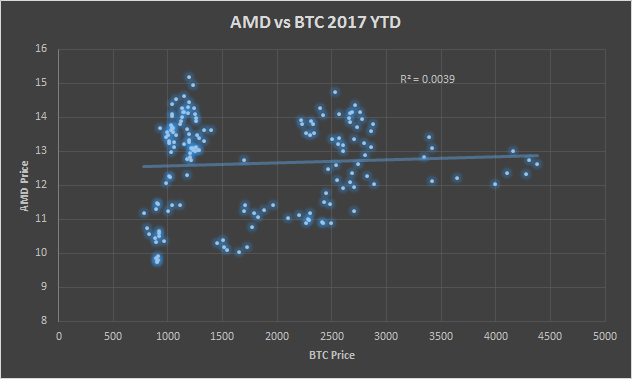 Surprisingly, AMD and Bitcoin have had only a slightly positive correlation in 2017.

There are various stocks trading in the OTC markets that are more directly related to bitcoin and electronic currencies. It is important to note that these stocks are very risky. 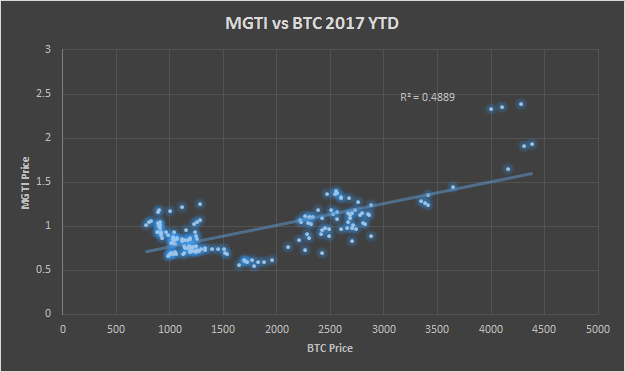 A large portion of MGTI’s price can be explained by movements in the price of bitcoin. 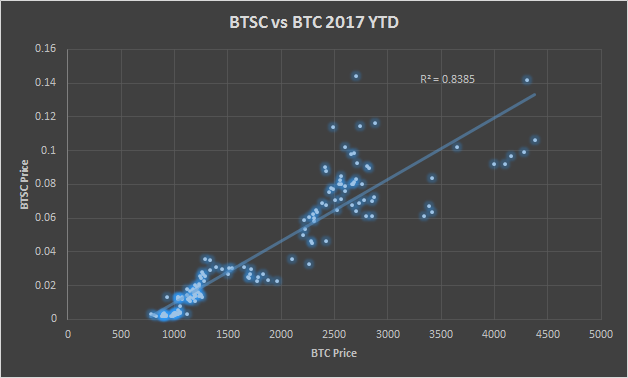 BTSC is obviously very correlated with the price of bitcoin.

BTCS, Inc. (OTCQB:BTCS) – BTCS considers itself the first pure play U.S. public company focused on blockchain technologies. BTCS has stated that in 2017 its goal is to broaden its digital assets and focus on mining. 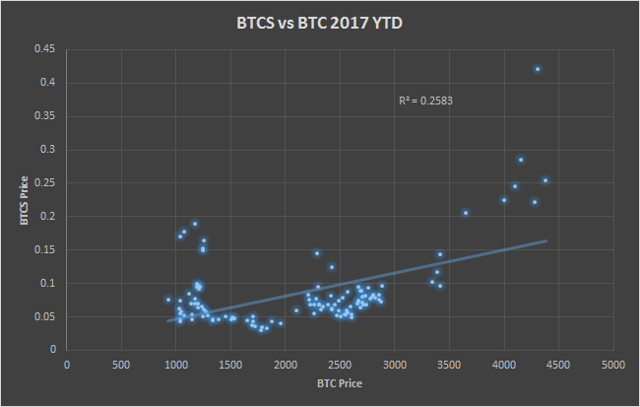 BTCS certainly is correlated with bitcoin, but includes a very high level of volatility. Note: Data is from March 13th forward. 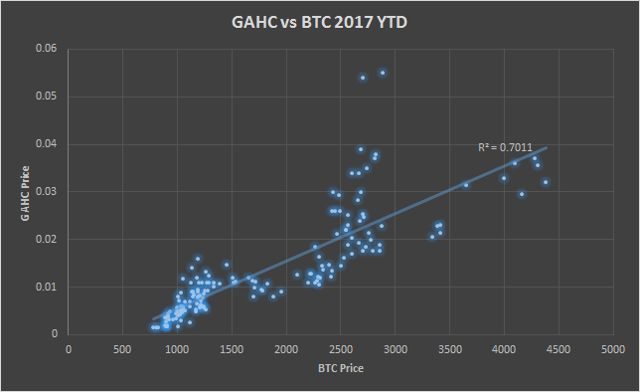 GAHC has a very clear and strong correlation with the price of bitcoin.

There is currently a lack of exchange traded funds that track bitcoin. This may change in the very near future though.

VanEck Bitcoin Fund – VanEck has filed for a bitcoin ETF and, if approved, it would be the first of its kind. This is a big IF though, because the Winklevoss Bitcoin ETF was rejected by the SEC earlier this year. VanEck may also have some competition when it comes to opening the first bitcoin ETF.

Grayscale Bitcoin Investment Trust (OTCQX:GBTC) – The investment trust holds bitcoins and can be traded on your typical broker. I would be wary of OTCQX:GBTC though, because of the fact it trades at a premium.

Bitcoin Futures – The Chicago Board of Exchange (CBOE) recently announced that it would be introducing bitcoin derivatives.

The nature of bitcoin and the process of buying bitcoin are much different than traditional investments. This does not prevent traditional investors from gaining exposure to bitcoin in their brokerage accounts though. There are a handful of stocks available to investors that give different levels of exposure to bitcoin and have varying degrees of risk. Stocks like NVDA and AMD are larger companies that offer some exposure to cryptocurrencies while being relatively less risky. OTC stocks like MGTI, BTSC, BTCS, and GAHC offer the ability to leverage the price of bitcoin, but are extremely volatile and risky.

I wrote this article myself, and it expresses my own opinions. I am not receiving compensation for it (other than from Seeking Alpha). I have no business relationship with any company whose stock is mentioned in this article.

Additional disclosure: The OTC stocks mentioned in the article are very volatile and risky due to the nature of OTC markets. Investors should take special consideration before investing in these stocks.

The graphs in this article were generated using Excel with the data coming from Quandl and Yahoo Finance.

Editor’s Note: This article covers one or more stocks trading at less than $1 per share and/or with less than a $100 million market cap. Please be aware of the risks associated with these stocks.