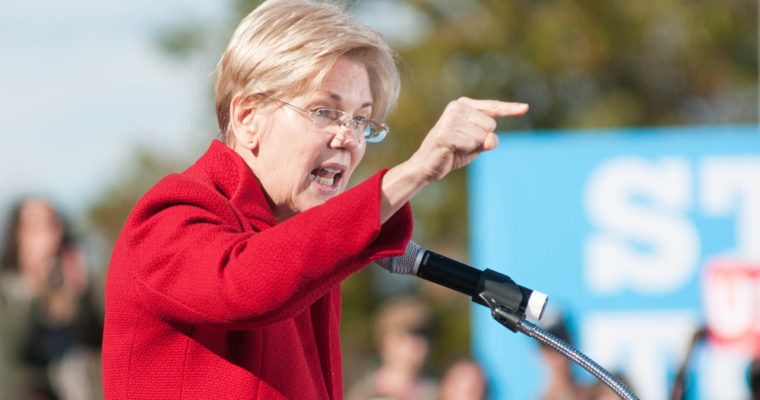 Senator Elizabeth Warren has joined the 2020 United States presidential race, after announcing on Monday that she will be developing an exploratory committee, according to a report on the Wall Street Journal.

With the exploratory committee, Warren will be able to formally raise funds and make key staff appointments before she officially kicks off her presidential campaign.

The Democratic politician from Massachusetts, who has made quite a name for herself due to her criticisms of corporations, large banks, and most recently, cryptocurrency, has become the first major candidate to declare her desire to run for the highest office in the United States government.

She also released an announcement video on her website, which contained some of the regular anti-Wall Street sentiments that will no doubt be a central theme of her campaign platform. In the video, which was posted on Monday, Warren said:

America’s middle class is under attack. How did we get here? Billionaires and big corporations decided they wanted more of the pie and they enlisted politicians to cut them a fatter slice.

With her announcement, Warren will be entering a 2020 presidential race that is already heating up, with many Democrats already sending hints that they will be looking to take on President Donald Trump. Former Vice President Joe Biden and Senator Bernie Sanders, both of whom have run for president in the past, are said to be eyeing 2020 presidential runs, and are they are both expected to make their official announcements in the coming weeks. Other Democrats who are supposed to jump on the campaign trail before the mid-point of 2019 include Kamala Harris, Cory Booker, Kirsten Gillibrand, and former New York Mayor Michael Bloomberg.

The impact of a Warren presidency might not particularly bode well for the crypto industry, with the Democratic politician not seeming to be a fan of digital assets and initial coin offerings (ICOs) in particular. Back in 2017, Warren stated that she was worried about Bitcoin and other cryptocurrencies, claiming that the volatility of the crypto market has the potential to leave a lot of American families hurt.

In the same manner, while speaking at a hearing of the Senate Committee on Banking a few months back, Warren criticized cryptocurrencies, asserting that they are very easy to steal and that a lot of retail investors have also been swindled as a result of various ICOs scams.

“The challenge is how to nurture productive aspects of crypto with protecting consumers,” she told the committee.

Get Exclusive Crypto Analysis by Professional Traders and Investors on Hacked.com. Sign up now and get the first month for free. Click here.