Distributed ledger technology, colloquially termed “blockchain,” is making a bold promise to help bring the trade industry into the digital age. To help shed light on the intricate workings of the technology and the role that it is playing in the international trade industry, Trade Finance Global partnered up with the World Trade Organization earlier this month to produce a 56-page report titled “Blockchain & DLT in Trade: A Reality Check,” endorsed by the International Chamber of Commerce.


David Bischof, deputy director at the ICC’s finance for development hub, shared in a private interview: “This ‘Blockchain & DLT in Trade’ report is not only an indispensable tool for the entire trade ecosystem, but foremost clearly shows that standardisation in trade and trade finance is a key challenge to ensure the numerous blockchain-based platforms are of use for businesses that trade.” He continued:

“To make technology work for all, ICC is working on a digital trade standards initiative together with its partners to fill this gap, by creating mechanisms that deliver better access to innovation for all.”

The report begins by introducing a periodic table of DLT Projects — a design chosen to simultaneously represent striking similarities and distinct differences. On the actual periodic table, hydrogen may be most similar to helium in terms of mass, but the two remain radically different when it comes to reactivity. On the trade finance periodic table, similar comparisons and differences can be observed between the projects.


The full report dives into each of the initiatives being pursued, providing some background as to what each is seeking to accomplish and the tools, participants and structures that will help them get there. Perhaps more interesting, however, are the results of the quantitative survey that the report outlines. Over 200 participants from the banking, fintech, industrial and corporate sectors were surveyed to shed insights into current perceptions of the industry’s opportunities, challenges, outlook and state of development.

The report observed that 44% of respondents using or developing DLT listed increased speed and efficiency as a top-three benefit from utilizing the technology in the trade finance sector, while 35% indicated cost reductions. These trail behind transparency, which 55% listed as a top benefit. These results seem to indicate a wealth of opportunities for the new technology, with cost savings through efficiency and transparency leading the way.

These opportunities may be playing a role in driving a positive forward-looking perspective for the industry. Based on the report, there seems to be a collectively positive perception of the state of the industry at the 5-, 10-, 30- and 50-year outlooks. The 10-year industry outlook holds the most positive sentiment, with a modest decline through the 30- and 50-year views. This seems to indicate that the state of the technology and its widespread adoption will grow substantially over the next 10 years before reaching a peak and slowly trailing off. While the sentiment of the outlook remains consistent between firms using and developing DLT and those that are not, the magnitude of this sentiment differs substantially.

Emmanuelle Ganne, senior analyst in the WTO’s economic research and statistics division, shared her thoughts in a private interview:

“Blockchain & DLT have the potential to truly transform international trade, but technology is only a tool. As more and more projects move into production, putting in place the right policy environment becomes increasingly important. Governments have a key role to play in this respect.” 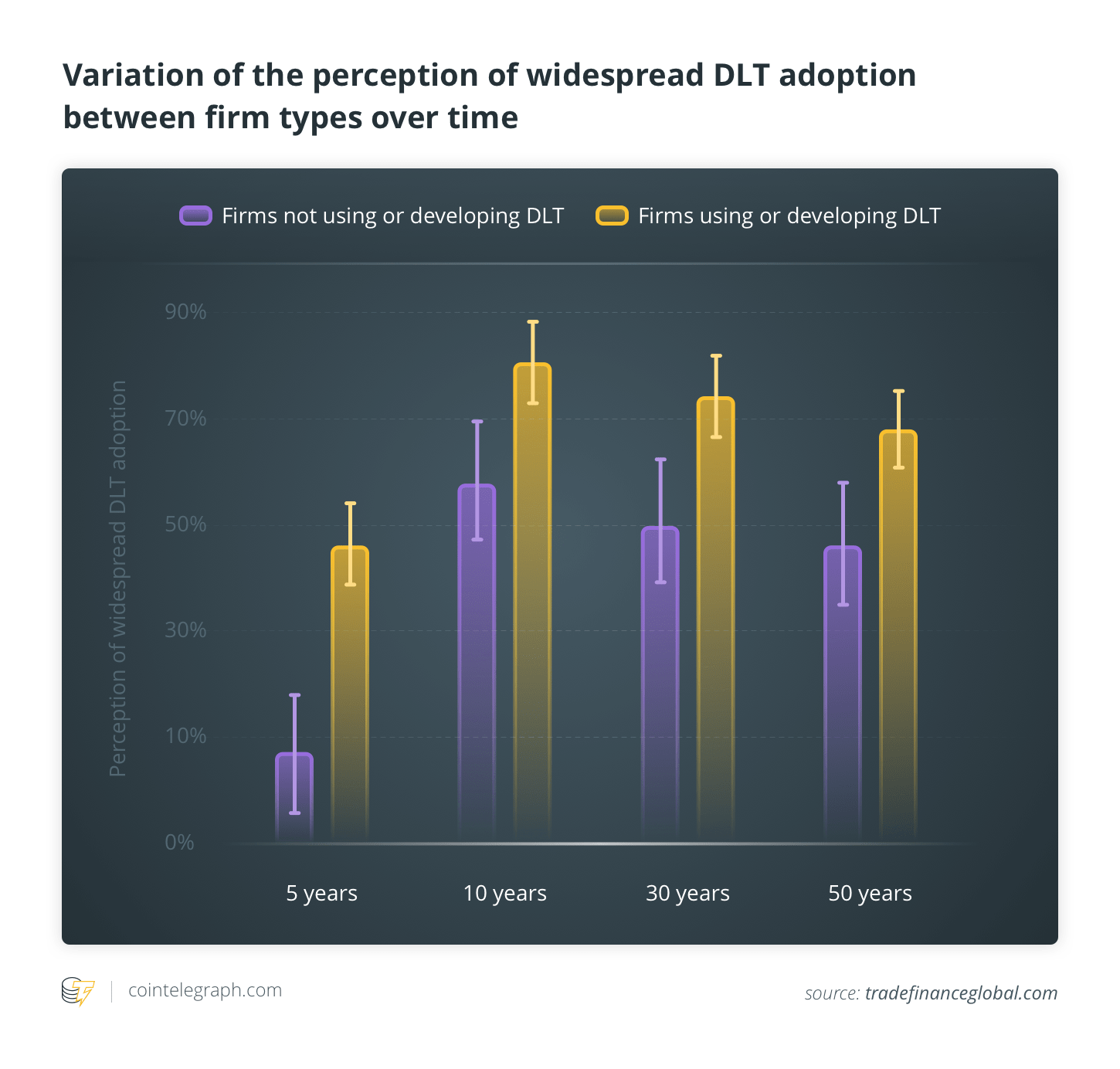 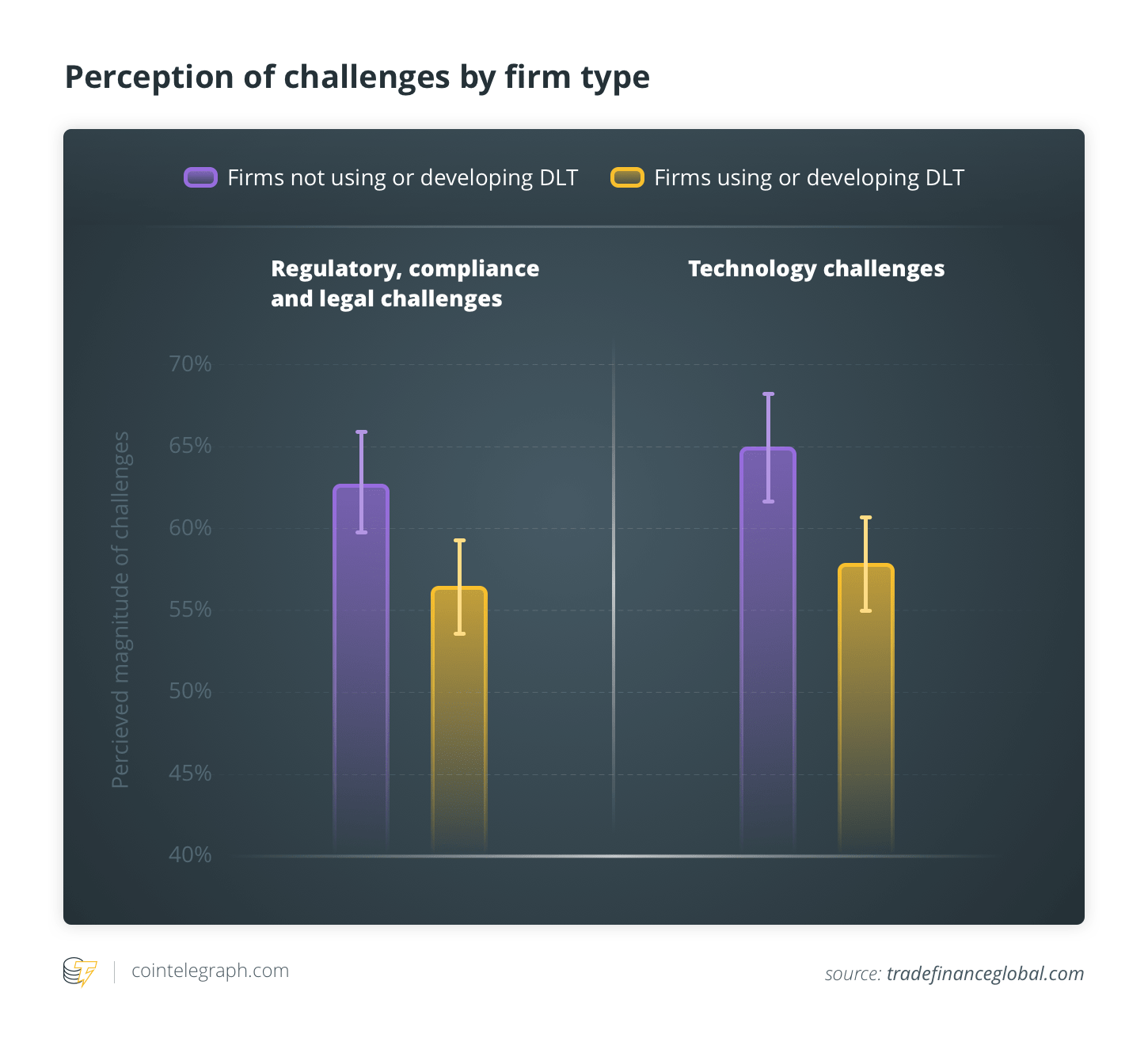 Another insight can be gained when looking at how the challenges facing DLT are perceived between the two two groups. Those using or developing DLT perceive regulatory, compliance, legal and technological challenges as having a significantly smaller magnitude.

Similarly, among firms using or developing DLT, there is a slight negative correlation between the current state of development for a firm and its perception of both regulatory and technological challenges. The further along that a firm is in implementation, the less prominent it views the challenges of the industry. This could be because firms actively involved in the space are constantly aware of when an advancement has been made to overcome a past challenge and are thus better attuned to the current state of the industry and its potential.

However, this data merely represents a gauge of perception, and could also mean that firms using or developing DLT hold a natural bias that causes them to view these challenges through rose-coloured glasses.

These challenges, however, are not to be understated. A massive 91% of respondents reported that DLT facing an interoperability challenge was reported by 91% of respondents, roughly 50% of which indicated that this poses a significant challenge. Furthermore, 65% of survey respondents using or developing DLT admitted that choosing between various DLTs is a challenge their organization has been facing and 86% indicated integration into back office systems as a challenge. While these challenges are undoubtedly real, as my grandmother used to say: Challenges are merely opportunities in disguise. In this case, they are providing an opportunity for firms to break down the barriers to digitization and bring the industry into the future. 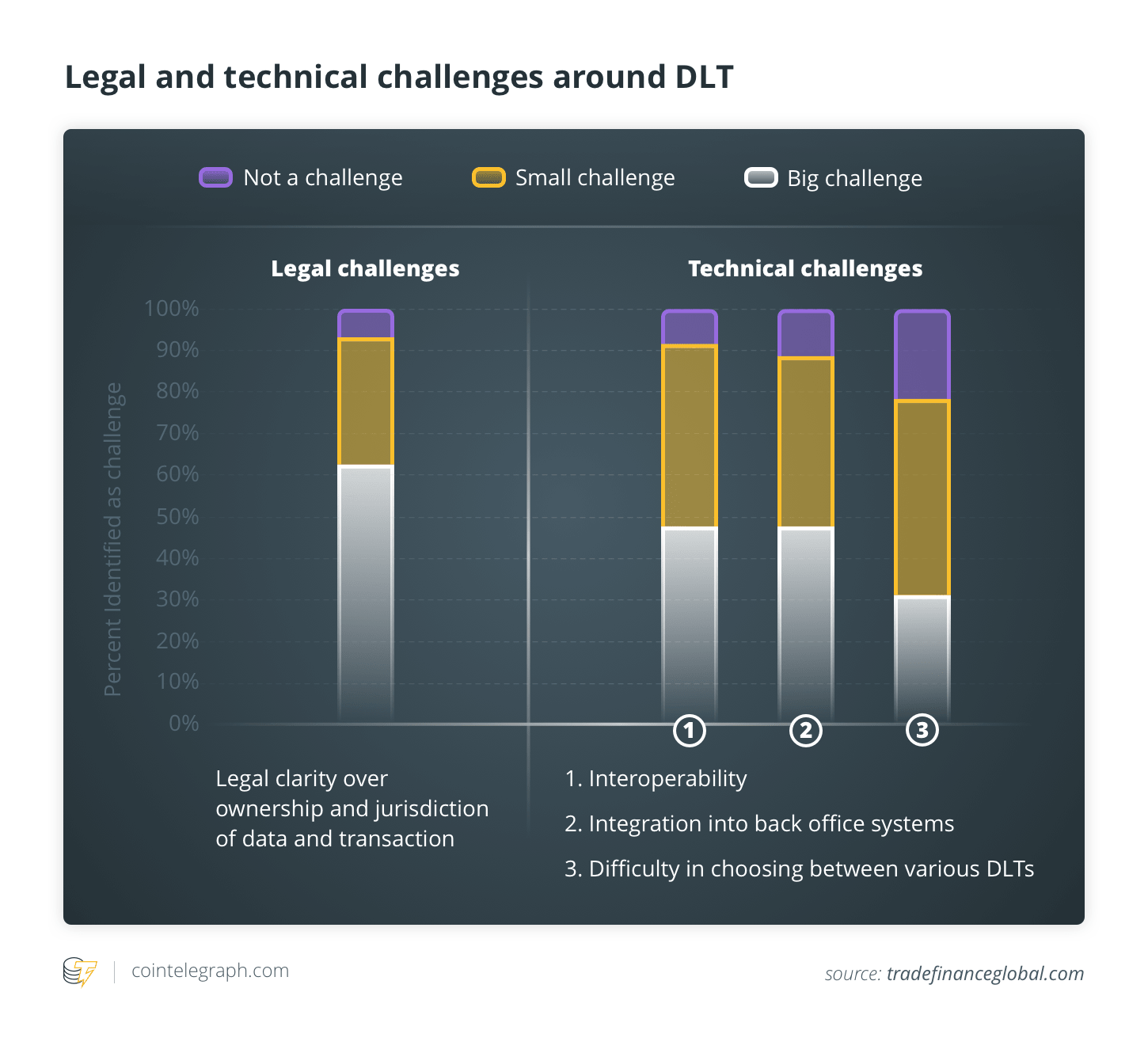 The views, thoughts and opinions expressed here are the author’s alone and do not necessarily reflect or represent the views and opinions of Cointelegraph.