The benchmark cryptocurrency seemingly copied the precious metal’s retracement moves during the Wednesday session. At one point in time, it was trading at $11,148 (data from Coinbase), down 7.76 percent from its weekly top. But it bounced back ahead of the New York session, rising about 4.54 percent from its intraday low.

The same happened to gold (Symbol: XAUUSD). The metal plunged by more than 10 percent from its record high at $2,075.28 an ounce. But traders caught the dip right ahead of the New York opening bell, sending its price to an intraday high at $1,949.08 an ounce.

The mirror moves followed an update from a data analytics platform Skew on August 10. The portal reported that the Bitcoin-Gold one-month realized correlation grew to an all-time high this month. It further acknowledged the popular “store of value” narrative as the core reason behind their growing proximity.

So it appears, the pullbacks in both the markets surfaced on the day when the US dollar got weaker. It showed that the fall that happened earlier this week removed weak longs. Now both assets are consolidating before they prepare for another move to the upside.

“The outlook remains positive in a lower interest rate environment, particularly with the weakening US dollar,” said Michael McCarthy, chief strategist at CMC Markets. “The settings are unchanged, we’re seeing a record amount of stimulus and have real fears about the risks to growth.”

Massive amounts of money printing and near-zero interest rates have helped Bitcoin rise by 60 percent this year. Gold also surged by more than 26 percent against a similar dovish outlook. Observers now believe that investors would keep seeking shelter in safe-havens as long as they fear about currency debasement and inflation.

A $12K Bitcoin Back in Sight

Strong fundamentals have improved Bitcoin’s short-term technical outlook. For Mati Greenspan, the founder of Quantum Economics, the cryptocurrency has enough fuel to rally further as long as it maintains a strong footing near the $10,000-level. The veteran investor explained:

“The level of $10,000 has represented a strong psychological barrier for Bitcoin for the last few years. Now that barrier is broken and there are no major levels of resistance on the graph until the all-time high at $20,000.” 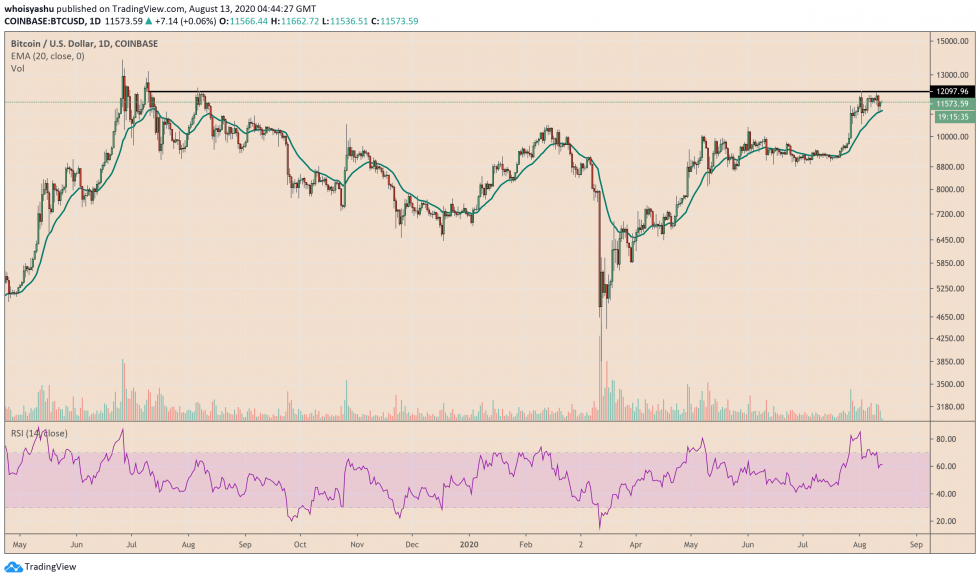 Bitcoin chart from TradingView.com showing BTC/USD recovering from below $11,500.

Incidentally, gold also finds itself surrounded by similar upside calls. Leigh Goehring, the managing partner of Goehring & Rozencwajg Associates, stated that the precious metal could fall towards $1,500-$1,700 in the coming sessions. But he also suggested that the dip would work as a catalyst to shoot gold prices upwards all over again.

“Prices could continue to see a pullback because of quickly receding fears of the COVID-19 pandemic,” Mr. Goehring said. “This would be a tremendous buying opportunity because I’m a firm believer that the next leg is going to be driven not by COVID-19 fears but by inflationary problems.”

So it appears, Bitcoin continues to watch the same fundamentals to resume its price rally. That makes the short-term target of $12,000 achievable.