Bitcoin Is Primed to Move Even Higher Than It Has

Bitcoin is primed to move even higher after breaching the pivotal $12,000 resistance, according to analysts. This is due to how important $12,000 has been to BTC’s price trajectory over recent weeks, acting as a rejection point for three separate rallies.


One trader shared the chart below as BTC began to scale higher on Monday morning. It shows that BTC has confirmed an ascending triangle, a textbook chart pattern often seen by analysts are bullish.

The breakout suggests a move to $12,600, the trader who shared the chart below explained.

As reported by Bitcoinist previously, another trader shared the chart below. It shows a different iteration of the ascending triangle, and it predicts that Bitcoin will move towards $13,000 on the breakout. 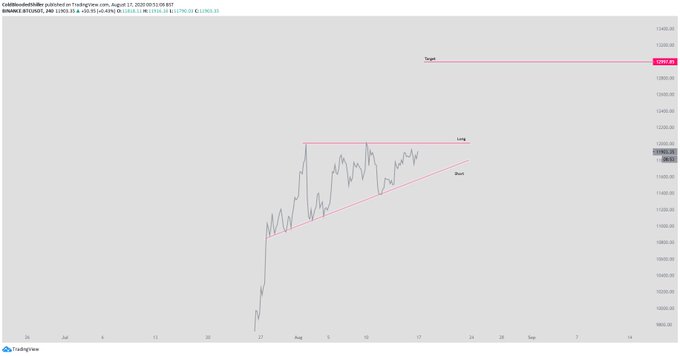 $13,000 seems to be the level that many are targeting as there is little technical resistance until that level.

One historically accurate trader recently commented that $13,000 is in Bitcoin’s scopes. This came after he predicted last week’s retracement would bottom in the $11,100 region:

“Lots of liquidity still above us. And the monthly support is still support. Short term I think 11900 is possible. But as you know, mid term I’m still aiming at 13k. Let’s see how much we can get.”

This was echoed by Eric “Parabolic/King” Thies, a cryptocurrency analyst and indicator creator. He said that there is little macro resistance until $13,300:

How fast BTC gets there, though, is not yet clear. The asset is pushing higher as this article is being written, with money flooding in after Bitcoin reclaimed $12,000.