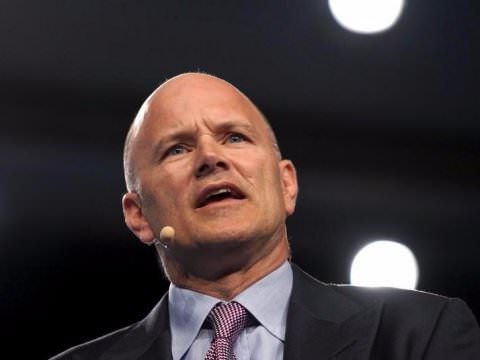 Billionaire investor Michael Novogratz, a legendary ex-hedge fund manager, formerly of the investment firm Fortress Investment Group, has said that the Bitcoin price will likely see a 30 percent increase by the end of 2018.


Once Bitcoin surpasses major resistance levels at $6,800, $8,800, and $10,000, Novogratz stated that institutions will enter the market via trusted custodian solutions.

During an interview with CNBC Fast Money, Novogratz explained that it is impossible for Bitcoin not to rebound to the $8,800 to $10,000 range. Over the last three days, the crypto market has added $25 billion to its valuation, triggered by the 100 percent increase in value of Ripple and strong momentum demonstrated by Ethereum.

As CCN previously reported, Novogratz emphasized that the next long-term rally, which may lead the valuation of the crypto market to reach $20 trillion, will be triggered by FOMO (fear of missing out) amongst institutions like pension funds and hedge funds.

In the past month, Morgan Stanley and Citigroup have released their plans of adding crypto custodian solutions to their existing infrastructure in the months to come. With BitGo and Coinbase already operating as trusted and regulated custodian solution providers, there are sufficient products institutions can rely on to enter the crypto market.

As such, Novogratz stated that once Bitcoin demonstrates another strong short-term rally supported by individual investors and retail traders by the end of this year, more institutions will invest in the market.

“It won’t go there ($20 trillion) right away. What is going to happen is, one of these intrepid pension funds, somebody who is a market leader, is going to say, you know what? We’ve got custody, Goldman Sachs is involved, Bloomberg has an index I can track my performance against, and they’re going to buy. And all of the sudden, the second guy buys. The same FOMO that you saw in retail [will be demonstrated by institutional investors],” explained Novogratz.

It’s Not All Talk

In 2017, there were discussions on the movement of capital from the traditional finance sector into the crypto market. However, at the time, there was no infrastructure in place to lure in institutions, which meant that even if some institutions were attracted to the market, there were no services they could use to invested in the asset class.

With significant progress being made in recent months, companies like Coinbase and BitGo expect billions of dollars to come into the market and by 2019, as long as Bitcoin maintains momentum in the $8,800 to $10,000 range, the crypto market is expected to experience a substantial increase in valuation.

Although Bitcoin has not recorded a large upward movement in the past two days like Ripple and Ethereum, the dominant cryptocurrency has demonstrated stability throughout August and September, which is positive for the mid-term performance of the asset.