Stellar (XLM) has been consolidating in recent weeks, struggling to garner the momentum that many of its smaller counterparts have been seeing.


It now appears that the cryptocurrency could be well-positioned to see an explosive uptrend in the coming few weeks, but in order for this to come to fruition, bulls must guard a crucial level.

This support level has been holding strong for quite some time now, but the lack of intense buying pressure may be putting it at risk of being broken.


One analyst mused this possibility, explaining that holding above this level could allow it to post massive gains against Bitcoin – even sending it as high as 0.000014 BTC.

If it stagnates against the benchmark cryptocurrency, however, a significant decline towards 0.000003 could be imminent.

Stellar Shows Signs of Strength Despite Underperformance of BTC

At the time of writing, Stellar is trading down roughly 4% at its current price of $0.102. This is around where it has been consolidating since mid-July.

While looking towards its Bitcoin trading pair, however, it appears to be in a far grimmer situation, as it is currently trading at 0.000008 BTC – marking a notable decline from its monthly highs of 0.0000115 BTC.

This underperformance has come about as a result of Bitcoin’s strength over this time frame. Many larger altcoins have failed to match BTC’s uptrend, despite the parabolic rallies seen by many smaller tokens.

One analyst is now noting that he believes Stellar could be well-positioned to see some near-term upside while looking towards the crypto’s BTC trading pair.

“XLM: Closed back above the range high after faking out bears. If this was re-accumulation then I don’t think price should get anywhere near the range EQ (midpoint), hence the stop placement.”

While looking towards Stellar’s Bitcoin trading pair, another analyst explained that he, too, thinks 0.000014 is a reasonable upside target.

However, a failure for it to gain against Bitcoin in the near-term could cause it to see a capitulatory decline that sends it significantly lower.

“XLM update: Almost a year after my last update we’re still sitting at the same price level. As long as XLM trades above the trading range, the 1400 target remains standing. Fall back in the range and I’d expect yet another move lower towards 300 sats.” 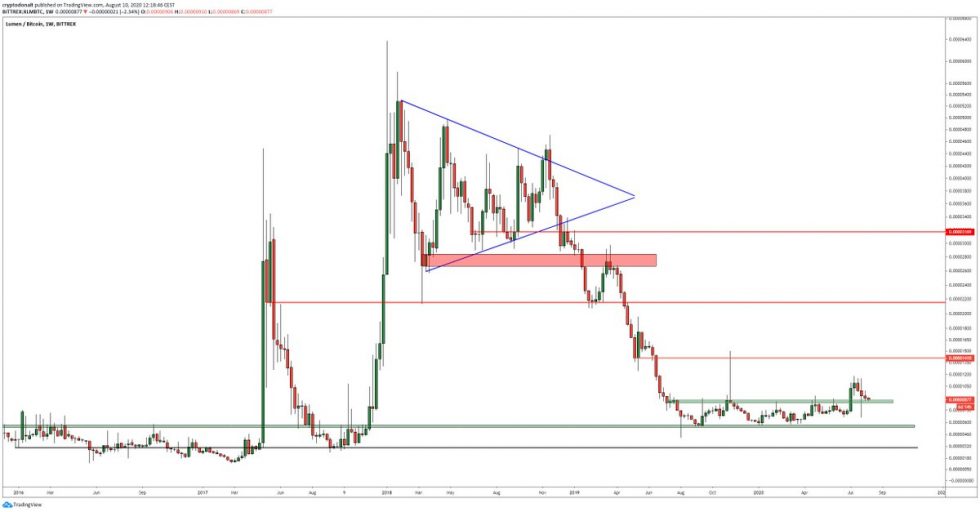 If Bitcoin pushes higher and recaptures some of its market dominance, this alone could be enough to spark Stellar’s descent towards the analyst’s downside target.