Quick menu
Daily Bitcoin News > Most Popular > The organizer of fraud Questra World, A.G.A.M. and Forex Trend Pavel Krymov will be in the remand prison 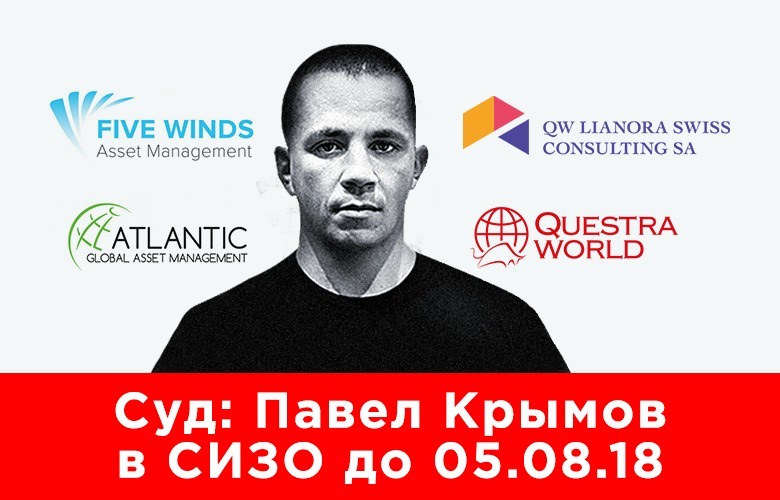 Court judgment: the organizer of fraud Questra World, A.G.A.M. and Forex Trend Pavel Krymov will be in the remand prison until 05 August

Over 15 years of criminal activity, the fraudster has created more than 40 scams, which led to massive investigations around the world. In the summer of 2017, several regular criminal cases were initiated on Krymov under Article 190 part 4 of the Criminal Code of the Republic of Kazakhstan. The criminal was long in the international wanted list and was arrested on 07 February by Russian law enforcement agencies. By decision of the Khimki court, Pavel Krymov was taken into custody and sent to remand prison -4 of the Federal Penitentiary Service of the Russian Federation.


On 15 March another trial took place over the fraudster, during which he was sentenced to extend the detention of the criminal Krymov in remand prison before 05 August – that is, for another six months. It is determined that before this date the Department of Internal Affairs of the Republic of Kazakhstan will conduct all pre-trial investigations, after which Pavel Krymov will be extradited to Kazakhstan.

Recently, law enforcement agencies have noted the growth of appeals suffered by the pyramids of Pavel Krymov.  Among the most famous fraud scams are Forex Trend, Private FX, Panteon Finance, Prime Broker and Questra Holdings (now operates under the names of Five Winds Asset Management and QW Lianora Swiss Consulting).

Law enforcement agencies: Pavel Krymov will receive up to 7 years of imprisonment. Pavel Gennadievich Krymov is not for the first time the first person involved in large-scale criminal cases. The latest examples: in 2015, the scammer brought down his financial pyramid Forex Trend.

This organization as a large broker working in the foreign exchange market for several years collected money of investors. To avoid punishment for fraud in Forex Trend, Krymov paid more than 500,000 US dollars as bribes to officials and disappeared in Latvia.

However, at the moment, the arrest of the criminal has attracted the attention of many media and the public. Therefore, now Krymov can not escape punishment. Under the legislation of the Republic of Kazakhstan Krymov can be sentenced to a term of up to 7 years imprisonment for fraud in a particularly large amount.