The crypto rally that greeted the new year has definitely brought gains to the world of altcoins. According to CoinMarketCap data, most huge gains were made by altcoins in the past 30 days. AVAX, native token of the Avalanche blockchain, is one of them with gains of up to 32% in the seven days.

The rally came as major cryptos like Bitcoin and Ethereum all registered gains and increased investor sentiment. Although the fear, uncertainty, and doubt of the last year’s bear market is still present, the increasing chance of a recession still gives investors some worry.

What Supported The Avalanche Rally?

The Avalanche ecosystem has been bullish. Recently, Shopify partnered with Avalanche to allow Shopify merchants to sell their NFTs. According to public information, users don’t need to handle any cryptocurrencies to buy NFTs.

Venly, one of the numerous blockchain partners of Shopify, created a no-code tool for sellers to create NFTs. In a recent interview, Venly co-founder Tom Dierckxens said that this evolution in NFT technology is an evolution which can be adopted in the mass market.

This is only the most previous on-chain development for the ecosystem. On a previous tweet by Axaholic, a Twitter account dedicated to Avalanche updates, the ecosystem partnered up with Re Protocol which tokenizes the reinsurance industry, empowering business through blockchain solutions.

On-chain developments also led to Avalanche experiencing a strong uptick in development activity and price as seen on data provided by Santiment.

Also, the world’s largest cloud provider, Amazon Web Services (AWS), has joined forces with blockchain technology firm Ava Labs to speed up and broaden the use of blockchain across different types of industries.

With this collaboration, Avalanche, Ava Labs’ layer-1 blockchain, will be more accessible to individuals and businesses, and node administrators will have more control over the network’s performance and functionality.

Will AVAX Maintain Its Momentum?

The current momentum seems to be profit-taking behavior before another bullish leg up. With the markets anticipating lower Consumer Price Index levels, AVAX might have a needed boost in the coming release on Thursday.

However, with its high correlation with Bitcoin, it could follow the top crypto in any direction. Bitcoin, as of writing, has broken past the $18,000 mark and trading at $18,229, up 8.2% in the last seven days, based on data by Coingecko. 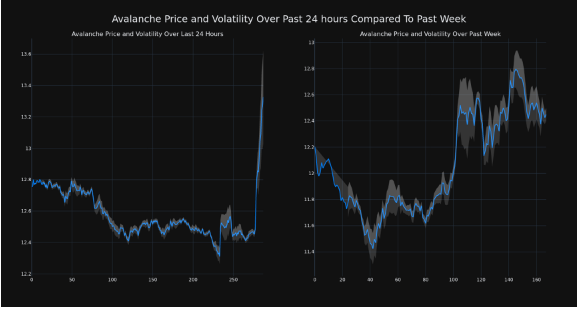 Meanwhile, the chart above contrasts the token’s price adjustment and volatility over the past 24 hours (left) with that during the last seven days (right).

The Bollinger Bands in the middle of the chart are a measure of the volatility of the price swings over a given time period (daily or weekly) and are shown in gray.

Volatility goes up when the space between the bands (or the amount of gray area) extends.