Solana’s ecosystem found itself in knee-deep trouble caused by fear, uncertainty and doubt over its connections with disgraced crypto exchange FTX.

Since after the collapse of the exchange, the ecosystem has been trying to distance itself from FTX former CEO Sam Bankman-Fried, with Messari even releasing a detailed overview of the ecosystem and how it was impacted by the implosion back in December 15.

But a new project called Bonk has been making headlines these past days, shooting up in price and giving Solana some welcome respite from the troubles it had to endure.

According to Bonk’s official website, Bonk stands for the Solana community who made the Solana ecosystem great in the first place. It is the first Solana dog coin “for the people, by the people.”

“The Bonk contributors are tired of toxic ‘Alameda’ tokenomics and wanted to make a fun memecoin where everyone gets a fair shot,” the official website says. 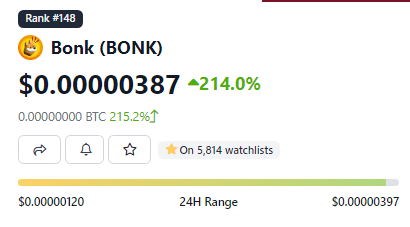 This certainly hit a spot on the Solana community and the crypto world as a whole as the token is now up 214% in the past 24 hours.

Solana ripping at 3.3k TPS despite an absolute tsunami of transactions around $BONK and a number of over tokens pic.twitter.com/BXXUFmKpmz

A recent tweet made by Solana Legend, co-founder of Frictionless Capital shows that the memecoin is driving the usage of Solana up with the blockchain registering 3,300 transactions per second.

The metric proves that Solana, the “Ethereum killer”, is not dead and has a bullish community supporting it.

With the token having an impressive burn rate and major exchanges listing it for open trading, Bonk is now making a name for itself. The expectations are high for the dog meme coin.  For instance, many are asking: Will it save Solana from extinction? Although the hot new memecoin is leading the charge for Solana in 2023, it isn’t without confusion. Their whitepaper itself is very vague, only detailing the distribution of the 100 trillion tokens to different parties.

According to data from Orca, a Solana on-chain liquidity automated market maker (AMM), Bonk has a very unsustainable rate of over 1% per hour just for providing liquidity.

Although this might only be in the short-term for it to attract additional capital from investors in the community.

Although 50% of the total BONK token supply has been airdropped, investors might be wary of the remaining half being held by the early contributors.

To counter this fear, early contributors to the project have a vesting period of three years, meaning that the tokens allocated to them are locked until the three-year period is done.

It is important to acknowledge the contributors’ drive to give the power back to the community of Solana.

However, how they will do that has not been clearly stated in the whitepaper. Although Bonk certainly has a positive effect on the price of SOL, it remains to be seen whether this project would actually live up to the hype surrounding it.